Gitte Jungersen addresses themes of life and death in her dramatic sculptures. Dogs, or in this case an elephant, are in the process of drowning as they are engulfed in a mass resembling bubbling lava. Unable to break free, the animal is literally stuck. It is a sight that brings shivers to our spine. Nothing is as repulsive to us as viscous matter that is in an intermediate state between liquid and solid, argues Mary Douglas in her book Purity and Danger. The slippery, slimy and sticky repel us. It is the illusion of such a material Jungersen has succeeded in creating with the help of the lump of clay that her figures are trapped in. The surface is full of bubbles as if it were at boiling point. She has achieved this effect by allowing the ceramic kiln to reach its top temperature, causing the glazes to start to boil before solidifying as the cooling process begins. Her physical handling of the material thus serves to underpin the thematic content. Whether it is dissolution that awaits or, on the contrary, a new life and a new narrative that is in the process of emerging, is an open question.

Her use of glazes is also worth examining. Jungersen is known for her knowledge of and experimentation with glazes, and this is also apparent here. Thick layers of a glaze she has made herself and Japanese shino glaze, as well as purchased stoneware glazes and, occasionally, mother-of-pearl lustre, help to give life to the surface of her work. 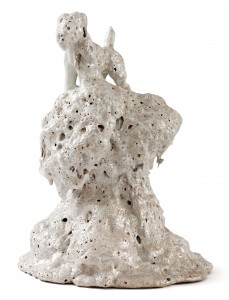 The animal figures represent a contrasting element. Their surface is smooth and shiny and they appear to be of a firm and hard consistency. They also belong to a figurative tradition, while the mass of clay must be characterised as non-figurative. Jungersen did not model the animals herself; she found them in second-hand shops. Some of them are collector’s objects from Den Kongelige Danske Porcelænsfabrik, while others are cheap knick-knacks.  In their new context, however, they have been removed from the history of porcelain figures and the cute and romantic aura associated with them. Instead, they take on a more disturbing and nightmarish quality. From children’s books and fairy-tales, we are used to projecting human properties onto animals, and it should not be difficult for viewers to identify themselves with the drama played out in these scenes.

This drama could be interpreted as a depiction of the studio ceramicist’s lonely struggle and dialogue with her material, where the situation fluctuates between being in control and yielding to the forces inherent in the material.  This struggle is described with a sense of both the absurd and the comic. At the same time, Jungersen underlines that, to her, the series shown at Thing Tang Trash is about identity, professional as well as personal. More specifically, it is about how disturbing it can be to give oneself over to uncontrolled states in which one lives at the intersection between the fascinating and the repulsive. More than anything else, the Place to be Lost series is thus about fundamental existential questions such as where we come from, who we are and where we are going.

Text from the exhibition catalogue Thing Tang Trash. The exhibition took place in 2011 at The West Norway Museum of Decorative Art, Bergen, Norway. Veiteberg is a Norwegian art historian and head of the research project Creating Art Value: A project about rubbish and readymades, art and ceramics 2008-2012.