Visitors to the Biennial in 2006, and particularly to the exhibition of the pieces selected by the jury of the competition, had the chance to discover the work of the young Danish artist, Gitte Jungersen.

Two square works, one green, the other red, appeared to be consumed by the material covering them, a highly bubbled enamel forming puffy bulbous excrescences developing outwards. They contrasted with Gitte Jungersen’s previous work which was composed of the same elements – exactly the same shapes of different sizes simply covered with pink, yellow, green, blue and multi-colored bubbled enamel. 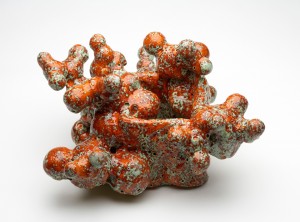 Powerfully posed, these cubic shapes produced a strong, intangible reality, forming the basis for her work and her later developments. Gitte Jungersen confronted this reality on which she projected her anxiety. Anxiety which we feel with her, like any human being, in an inexpressible way, but which we so like to suppress.

Today, Gitte Jungersen has dropped for good the register of the “container” without, however, completely abandoning the possibility of a practical function. The excrescences which consume the shapes seem to have escaped any idea of control, and form clusters of protuberances, minor lunar landscapes with no reference to anything, as colorful as they are strange and monstrous. They thus create kinds of mural stands, little environments, little “Land’s Ends” on which are posed, here an animal figurine – a sheep or a deer – there a human figurine from a fantasy – a story or a comic strip; real or imaginary characters such as a witch or Spiderman. 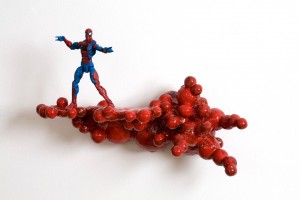 When looking at these pieces one needs to make an effort to adapt to the dimensions of the space created by Gitte Jungersen, confined by the emptiness around it – immense and agonizing – giving the powerful impression of being dangerous. There is, of course, the emptiness of the room where the work is, but also the emptiness of the environment imagined by the artist herself. This effort allows us to leave the dimension, quite real this time, in which we find ourselves, to plunge into that of this little world where, it seems, a story is being told. That of the figurine, which is there: What is it doing there? What will become of it surrounded as it is by nothingness? Or then, is it not rather an adventure concerning us more directly: our own adventure, which we unconsciously project onto the intentionally anecdotal little scene we have in front of us.

In fact, without realizing it, we have allowed ourselves to be invited to participate in the work of Gitte Jungersen, to escape from our world and rejoin the world she has created and organized with such mischievousness. The same themes of anxiety are treated, but in a still more surprising way than in her previous productions. 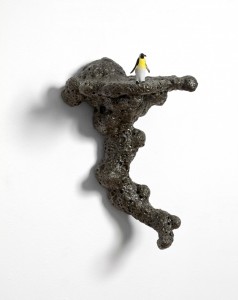 A particular sheep seems isolated, lost, in danger even, in a hostile environment. A certain majestic deer tells us all about experienced solitude. And then occasionally, humor and derision get the upper hand. Spiderman, ready to leap, speaks to us of the grotesque in man, of this animal which takes itself for a superhero, strong and invincible, projecting itself into invented lives which are too big for it. Save whom and what from whom and what? What chance do we really have of helping, of helping ourselves even? Like the frail sheep or the majestic deer, we are, finally, alone as we face life and its dangers and fears as well as our own future and dire destiny. Other scenes feature a lonely landscape with trees and the theatre of a really miserable life – that of a reclusive, isolated witch.

Gitte Jungersen’s aim is modest. While the works are splendid, the means employed are intentionally limited. It is the formal audacity of her work, the mastery of enameling techniques and the incongruity of the situations evoked by the addition of elements which seem to have been recuperated but chosen with great precision, which enriches the artist’s theme. It is by turns melancholic and funny. We see these pieces as the opportunity to smile, to marvel and to admire, but always with trepidation.

They are also the opportunity for Gitte Jungersen to escape a certain determinism, which consists, for the ceramicist, of producing only decorative or functional objects. By escaping from the production of simple, repetitive geometrical shapes with a defined function, Gitte Jungersen claims the right to artistic expression, that is, to escape from the motif to take on the possibility of asking herself questions, of questioning the world, of dialoguing in a more lively way with the spectators of her work, to speak out and to recount. At the same time as there developed, on the surface of her pieces and in their immediate surroundings, excrescences and other protuberances, Gitte Jungersen dropped the register of decorative object, limited in its development and its expressive capacity. Like many ceramicists of her generation, she thus asserted her desire to explore new territory and new possibilities. She also tended towards more sculptural pieces that resulted in this type of work, in which the ceramic material is at the service of a richer artistic theme. The intentional mixing with other materials such as the plastic of the figurines gives some indication of the freedom achieved by Gitte Jungersen. It is the coherence of the whole that is surprising: the appropriateness of the tone, the extreme sensitivity and the humor. Beyond the simplicity of the formal proposition, Gitte Jungersen invites us to share her own questioning about life with her intentionally limited and always well-controlled materials.

Text from the catalogue from the Biennale for Contemporary Ceramics in Vallauris, France 2008. Written by Yves Peltier, Commissioner of the biennale.
Gitte Jungersen was a member of the juried part of the exhibition and had a solo show at the biennale.